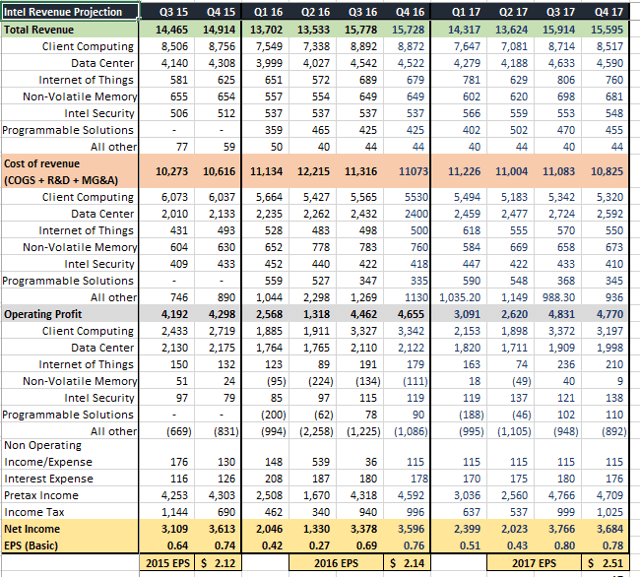 According to a Forbes report, Intel (NASDAQ: INTC) currently owns around 99% market share in the data center processing chip market. The same report mentions that tech giant Google (NASDAQ:GOOG) (NASDAQ:GOOGL), which spent upwards of $12 billion in 2015 on its cloud business, are buying these high-end server chips in the magnitude of 300,000 per quarter.

Intel’s processing chips are high in demand and feed into the data center segment’s 40% profit margin business. However, many tech investors are expecting this high profit margin to soon diminish. Advanced Micro Devices (NASDAQ: AMD), Intel’s chief competitor in the x86 CPU market, has seemingly made great strides with its Zen architecture while many believe Intel has grown stagnant.

According to a benchmark review by Hardocp, author Kyle Bennett concluded that Kaby Lake I7-7700K offers a minimal performance upgrade from the Skylake i7-6700k. In the week before New Year, a French Hardware magazine released a Zen Benchmark and commented “with its true eight cores, Zen accomplishes prowess despite its limited frequency of 3.3 Ghz. It’s getting dangerously close – for Intel – of the Intel 6900K while offering performance comparable to the Core i7 5960X which has an identical frequency”**.

In this article, we are conceding that AMD’s Zen CPUs will be competitive with Intel’s CPU offerings while undercutting price by at least 20%. We ultimately believe that Intel will see growth stay flat or even decline in both client computing and data centers in 2017.

Under the circumstances above, we are going to examine all of Intel’s current business segments and extrapolate reasonable growth rates in 2017 by analyzing historical and forward-looking industry trends. Intel’s healthy free cash flow has enabled the company to invest in growing industries such as Internet of Things, cyber security, non-volatile memory, and programmable solutions. Starting 2017, we believe these growing segments will shine bright and show investors that Intel remains a spectacular stock to buy even with the imminent threat of Zen.

Client Computing – This is one of the two business lines that will be harmed by Zen. Client computing is largely driven by the sale of core processing unit chips to manufacturers of laptops, desktops, tablets and phones or to retail stores that sell to consumers. Interestingly, Intel is beginning to see impressive operational efficiency in client computing. While the average y/y revenue growth for the nine months ending 9/30 is only 1.1%, the average y/y expense has declined by a significant 7.55%.

This improvement in cost efficiency translated to 30.8% growth y/y in operating profit for the first nine months. We expect the launch of Ryzen chips in mid Q1 ’17 to flatten Intel’s already slowing client computing growth. However, Client Computing will remain profitable due to improvement in operational efficiency.

Data Center – The business of selling high-end desktop processing chips to data centers has been enormously profitable for Intel, averaging a 47.2% operating profit margin over the past seven quarters. For the three quarters ending 9/30, the data center segment posted 12,568 million in sales for 2016, a modest 7.12% growth compared the same period in 2015. As the tech giants require more and more computation power to make use of the big data they have collected, we believe CPUs will continue to see moderate growth in data centers.

According to a research report by Jones Lang LaSalle, the multi-tenant data center market is estimated to grow at 12.1% annually from 2015 to 2018. The same report estimates that the cloud service market is expected to grow from 35.54 billion in 2016 to 76.73 billion in 2021. More data centers and cloud activity equate to a higher demand for core processor chips (although we need to be conservative because GPUs are also used in data centers now). We believe both AMD and Intel will benefit as a result of this growth in demand.

Nonvolatile Memory – This segment specializes in producing NAND flash memory products primarily used in SSDs. This has been a lagging segment for Intel which reported nine-month revenue of $1,760 million in 2016 – this presents a sales decline of 9.4% for the same period in 2015. Cost for the first nine months in 2016 reported to be 2,213 million, a drastic 28.1% increase from the same period in 2015. This increase in cost most likely resulted from the R&D spent on the 3D XPoint memory class in collaboration with Micron (NASDAQ:MU).

Intel recently announced the impressive Optane Hyperfast Memory product to its nonvolatile memory product family. Optane is set to be released in Q2 2017. According a report by NBC, global 3D NAND flash memory demand is a $5.2 billion market. This market is estimated to grow 33.7% annually and eventually reach $39 billion in total demand by 2022. These estimates seem incredibly optimistic but even meeting them half way would lead us to believe the nonvolatile memory segment will return to profitability.

Internet of Things -Intel designs processing platforms for industries in retail, transportation, industrial and buildings. For the nine months ending 9/30, Intel’s IoT segment has seen revenue grow 14.29% from 1.673 billion in 2015 to 1.912 billion in 2016. During the same period, operating profit is up 5.22% y/y. We believe this segment has the highest growth potential for Intel in the next five years. According to a report by Postscapes, the IoT spending reached $598.2 billion globally in 2015 and this figure is estimated to reach 724.2 billion by 2023.

According to Forbes’s forecast, IoT devices are estimated to grow from 15.4 billion in 2015 to 30.7 billion in 2020, and eventually 75.4 billion devices in 2025. General Electric (NYSE:GE) released a report that estimates industrial investment in IoT is expected to top $60 trillion in the next 15 years. These estimates (albeit optimistic) give us hope of long-term growth prospects for Intel even when the client computing and data center businesses begin to slump.

Programmable Solutions – We believe this is the most interesting segment for Intel going forward. Intel acquired Altera in Q1 2016 for $16.7 billion in hopes to integrating Altera’s SoC FPGA (field-programmable gate array) technology into its data center and Internet of Things business. In the words of CEO Brian Krzanich, “We will apply Moore’s Law to grow today’s FPGA business, and we’ll invent new products that make amazing experiences of the future possible – experiences like autonomous driving and machine learning.”

In the three quarters since the acquisition, this segment posted operating profits of -$200 million, -$62 million and $78 million. The losses in the first two quarters are likely attributed to acquisition costs that are now finalized. Furthermore, PSG posted an operating margin 18.35% in their positive quarter. We believe this margin will be sustained in the upcoming year. According to a Grand View Research report, the global FPGA market is expected to grow to $14.2 billion by 2024 from around $6.36 billion in 2015.

According to another report by Grand View Research, Altera Corp. and Xilinx Inc. currently own around 90% of the FPGA market. We believe the Altera acquisition would allow Intel to have direct exposure in the growing FPGA industry.

Intel Security – Intel provides cyber security through their McAfee group. According to an Intel news report, Intel split ownership of this business with TPG capital (49% Intel, 51% TPG) in Q3 2016 after a $1.1 billion equity investment to “drive growth and enhance focus as a standalone business.” The business is still led by Intel senior VP Chris Young and we assume Intel security/McAfee will continue to report in Intel’s financials but TPG is entitled to 51% of the segment’s earnings.

In the three quarters ending 9/30, this group has seen revenue grow 9% y/y while cost actually dropped 1.87%. This caused operating margin to soar 122% from $134M to $297M y/y for the same period. We are not quite as high on the growth for this segment as the numbers may suggest. The overall cyber security market (including IAM, Encryption, DLP, UTM, Antivirus, Firewall, IDS/IPS, Disaster Recovery) is estimated to grow from $122.45 billion in 2016 to $202.36 billion 2021, according to a report by marketsandmarkets.

Using insights gained from the examination above, we are going to make several key growth assumptions for each segment of Intel’s business. Using these assumptions, we will project the quarterly EPS going through Q4 2016 and full year 2017.

Client Computing in 2017 – Ryzen chips for client computing are estimated to release mid-February and we expect an immediate impact on Q1 2017 reporting for both AMD and Intel. For the four quarters in 2017, we project y/y revenue to grow 1.3%, -3.5%, -2% and -4% while costs will grow -3%, -4.5%, -4% and -3.8%. We believe Ryzen will affect second half of Q1 and take on Intel full force by Q2. Intel will have to respond by cutting prices, leading to lower revenue for Intel. However, we believe the costs for this segment will decline as an effect of operational efficiency, leading to overall higher margins.

Data Center in 2017 – As we discussed, there are still more growth opportunities in the server market for Intel. We are expecting AMD’s Naples Server chips to hit the server market by 2H 2017, most likely early Q3 2017. We estimate y/y revenue to grow by 7% and 4% for Q1 and Q2, only marginally lower growth than 2016. However, we believe Naples’ expected introduction in Q3 will force Intel to cut prices and lose some potential clients in 2H 2017.

Programmable Solutions in 2017 – We expect the Altera acquisition to help Intel’s business by adding to the bottom line as it did in Q3 2016 and create synergy with the data center and IoT segment to create more operational efficiency for those segments. Given the scenario above, we project y/y revenue to grow 12%, 8%, 10.5% and 7% while y/y costs grow 5.5%, 4%, 6% and 3%.

Intel Security in 2017 – Despite the impressive growth this segment has seen in the last two years, we expect growth will slow down in 2017. According to a report by TheRegister, worldwide security software revenue grew 3.7% to $22.1B in 2015 but the top 5 vendors, which includes Symantec, Intel, IBM, Trend Micro and EMC, saw market share decline 3% to 37.6%. We believe security has become a saturated market with corporate consumers leaning toward specialized security firms rather than big names.

Other 2017 Assumptions – We are expecting the operating loss for all other segment will average between its 2015 and 2016 levels, excluding the Q2 2016 outlier. Intel does not explain these losses in depth but we extrapolate that they result from acquisition cost, restructuring cost, unassigned expenses, profit-dependent compensation and expenses from the Intel’s “New Technology Group.”

Using the current P/E multiple of 17.35 and the estimated full year 2017 EPS of $2.51, we project a nine to twelve-month price target of $43.51 (range $41 to $44). At the current stock price of $36.79, this represents an 18.27% upside. Aside from this modest upside, Intel has increased their dividend from $.40 to $1.04 and repurchased $55 billion of stock in the last decade. Intel, for better or worse, has routinely generated value for its investors and we expect more of the same moving forward.

To answer the title, will Intel stumble in the wake of Zen? The answer is both yes and no. In the short term, sole ownership of the high margin data center and high-end client computing market will sorely be missed. However, in the grand scheme of things, We believe Intel’s solid growth prospect in multiple business segments, healthy financials and consistent dividend growth make it the potential backbone of any successful portfolio.

Thank you for reading!

**credit to Redditor Gobrosse for translating the Zen benchmark from the French magazine. Thank you!

I wrote this article myself, and it expresses my own opinions. I am not receiving compensation for it (other than from Seeking Alpha). I have no business relationship with any company whose stock is mentioned in this article.