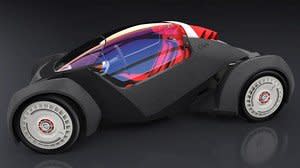 “Today’s transportation system is characterized largely by privately owned, individually driven, gas-powered vehicles that sit unused 95 percent of the time, cost over $1 trillion annually and emit 1 gigaton of emissions each year,” Phillip M. Rayer II, general manager, Local Motors. “A more cost-effective, efficient, equitable and convenient system is possible — one that delivers a variety of shared, electrified and autonomous mobility options when and where they are needed. We call this ‘mobility as a service’ — and we have proven it through the first 3D-printed structural car and the first self-driving electric vehicle to integrate the advanced cognitive computing capabilities of IBM Watson. Through co-creation, we are now working on the first 3D-printed driverless car for highways.”

MEMS & Sensors Industry Group Executive Director Karen Lightman expanded upon themes from MEMS & Sensors Executive Congress,” In MEMS and sensors, there is a need for co-creation, standards, connectivity and audio technologies that enhance voice user interface as well as ultrasonics that redefine gesture control,” said Lightman. “There was a collective buzz around driverless mobility solutions and environmental sensing. Attendees also learned about future-term technologies such as perpetual energy sources for autonomous sensing devices and printed hybrid electronics. As we look to 2017 and beyond, MEMS and sensors suppliers will continue to advance the user experience with every imaginable electronic product and system.”

Tech Showcase Winner and Hall of Fame
MEMS & Sensors Technology Showcase is a forum through which five finalists competed for attendees’ votes and the title of “winner.” The 2016 Technology Showcase winner, i-BLADES’ mobile Smartcase, is a new modular accessory that dramatically accelerates time to market and reach for IoT technologies. It lets new technologies quickly reach mass-market mobile consumers through one integrated smartphone accessory — a mobile phone case that forms a “hard-wired” smartphone connection, enabling add-on MEMS and IoT technologies.

About MEMS & Sensors Executive Congress
Now in its 12th year, MEMS & Sensors Executive Congress 2016 is an annual event that brings together business leaders from a broad spectrum of industries: automotive, communications, consumer goods, energy/environmental, industrial and medical. It is a unique professional forum at which executives from companies designing and manufacturing MEMS/sensors technology sit side-by-side with their end-user customers to exchange ideas and information about the use of MEMS and sensors in commercial applications.

About MEMS & Sensors Industry Group
MEMS & Sensors Industry Group (MSIG) is the trade association advancing MEMS and sensors across global markets. MSIG advocates for near-term commercialization of MEMS/sensors-based products through a wide range of activities, such as conferences, technical working groups and education. By bringing the TSensors™ (Trillion Sensors) initiative under the umbrella of events and programs, MSIG also increases worldwide awareness of emerging MEMS/sensors-based applications with huge commercialization potential in the next decade and beyond. Nearly 200 companies and industry partners comprise MEMS & Sensors Industry Group. For more information, visit: www.memsindustrygroup.org and follow MSIG on LinkedIn and Twitter (use @MEMSGroup).

Wishlist: Here are the things that we'd love to see with HomeKit