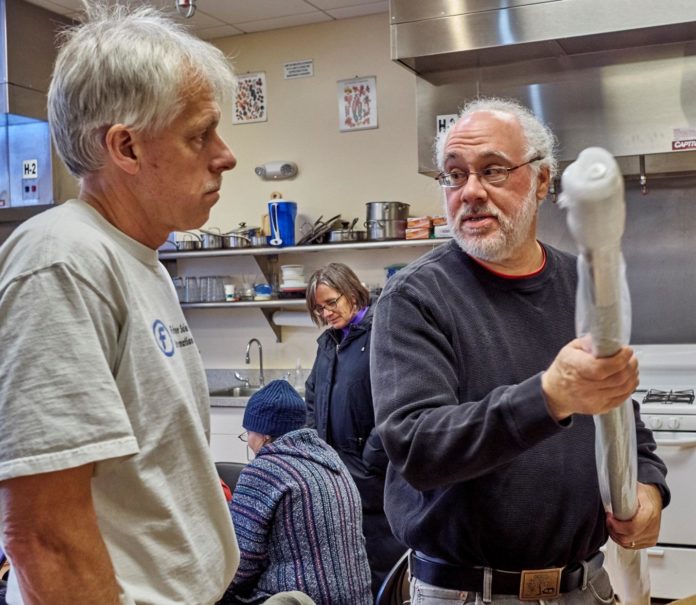 While no one was looking, a partnership between Cooperative Extension of Tompkins County (CCE Tompkins), local volunteers, and a Trumansburg electronics company vaulted Ithaca into the forefront of an international technology movement.

Known as “The Things Network,” this grassroots initiative supports the creation of free, community-owned data gathering networks that allow anyone to connect inexpensive wireless sensing devices to the internet. More than 350 communities worldwide are working on providing this service to their residents, but Ithaca is only the second TTN community (after New York City) to be certified in the United States and one of just 36 certified communities worldwide. A “gateway” with an antenna mounted on the roof of CCE Tompkins offices on Willow Street went live in mid-December and now provides this service to the entire city of Ithaca.

Ithaca’s leading role in the US TTN movement began last year with the designation of Terrill Moore, CEO of MCCI in Trumansburg, as the leader of the TTN initiative in New York City. Thinking to establish a parallel local presence, Moore recruited a group of like-minded volunteers as The Things Network Ithaca (TTNI).

TTN gateways can be plugged directly into home Wi-Fi routers to provide the internet connection, and members of TTNI soon began installing their own. Each gateway can serve a virtually unlimited number of wireless sensing devices over an area from one to several miles in diameter, depending on the terrain and the height of the antenna, and these ad hoc, relatively low-cost installations began providing TTN service at scattered locations around Tompkins County. But the real breakthrough came with the involvement of Ken Schlather, executive director of CCE Tompkins.

Following the installation of a gateway and rooftop antenna, Cooperative Extension hosted a December workshop in which TTNI members constructed wireless sensors for testing city coverage. By forwarding GPS data from their iPhones through these devices, they soon confirmed that the Extension gateway is providing coverage throughout the city and as far away as Cayuga Heights.

The result is that anyone in the city with the requisite technical skill can now deploy local networks of inexpensive, low-power wireless sensors and access the data from those devices from anywhere in the world with an internet connection. 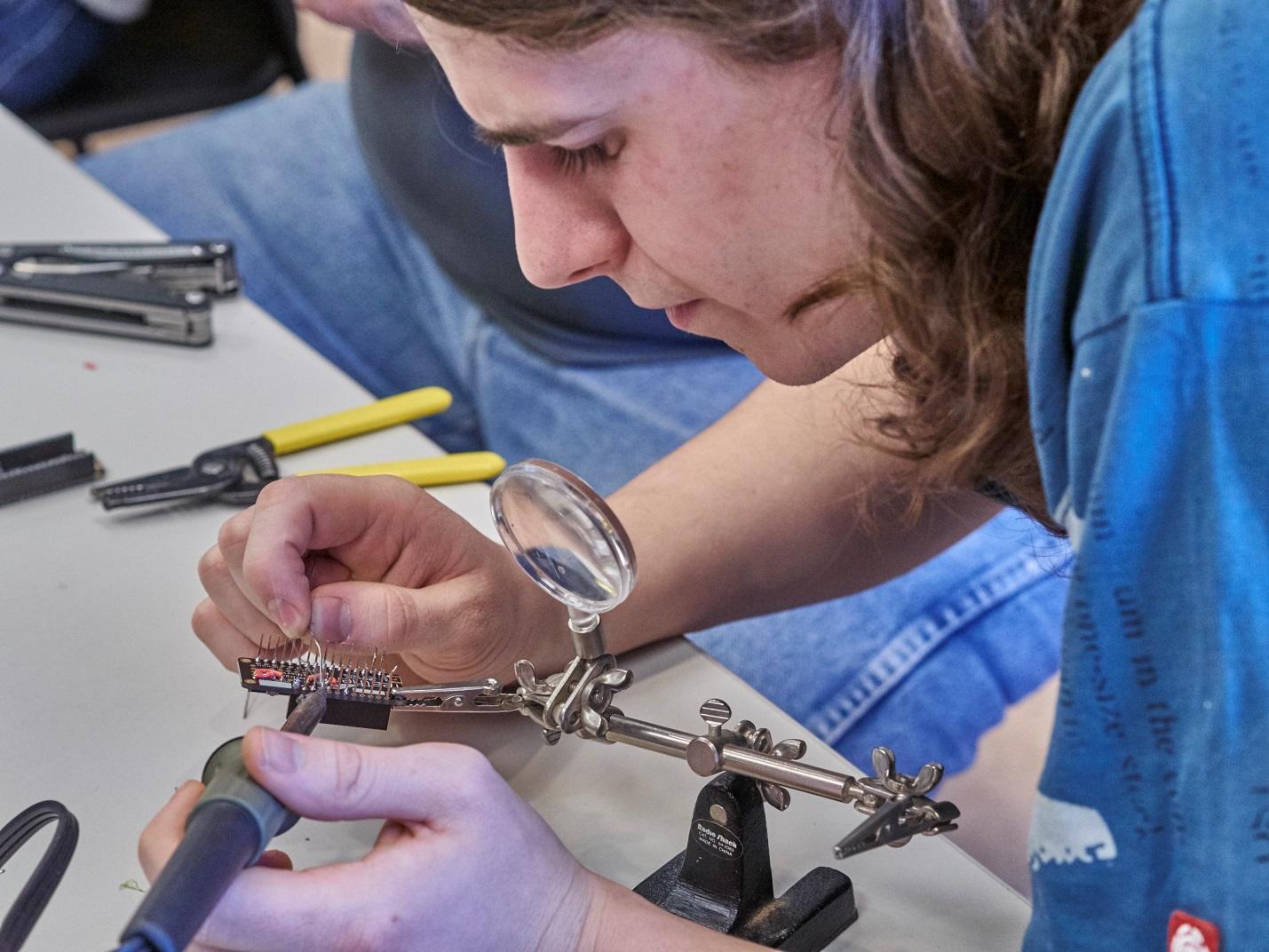 Open-source TTN “dashboard” software is easily available; the data is securely encrypted; and applications include just about anything that can be measured—temperature, pressure, humidity, location, methane levels, light levels, noise levels, radioactivity, energy use, water flow, the amount of liquid left in a tank—anything that can be expressed numerically and transmitted as a few bytes of data every minute or so. Potential users range from homeowners worried about water in their basements to farmers monitoring microclimate soil conditions to utility companies tracking real-time energy usage in commercial buildings. And the technology appears to be a perfect fit for “smart city” initiatives aiming to reduce energy use through better management.

The key technical breakthrough behind The Things Network is the development of a low-power radio technology called LoRa and a corresponding industry standard for LoRa-based wireless area networks called LoRaWAN.

Many wireless data-sensing devices operate in an environment where they need to be able to function unattended on battery power for months or even years at a time. This imposes a requirement for very low operating power that can’t be met by other “internet of things” technologies such as cell phone networks.

LoRaWAN meets the requirement for very low power consumption by trading off power against data rate. LoRa devices operate at less than one ten-thousandth of the speed needed for streaming video, for example. The most power-hungry of the three standard levels of LoRaWAN functionality allows data to travel at roughly the speed of an old-fashioned dial-up connection, and the less demanding levels of service intended for battery-operated devices move data far more slowly—just a few bytes at a time.

Fortunately, this data rate will support a huge number of very useful distributed monitoring applications that only need to transmit a number every minute or so. And the tiny size of each message means that a single gateway (and its associated internet connection) can in theory handle tens of thousands of sensors.

LoRa operates in an unregulated general-use radio frequency band, so licensing is not an issue. The price is right, too; LoRaWAN gateways to put sensor data on the internet are available for less than $500, and this is very early in the production cycle for these devices, before any economies of scale kick in. Similarly for the wireless devices that “talk” to each gateway; the wireless sensors built by TTNI in December to document radio coverage were assembled in a couple of hours by volunteers using off-the-shelf parts at a cost of around $60 each. LoRa radio chips themselves wholesale for about seven dollars apiece, so the cost of units like these if designed for just a particular sensor type and produced in mass would be substantially less.

The community-owned, open model of The Things Network is considered another advantage by people concerned about ownership of their data. The alternative to something like TTN is a commercial network run by a major player like Google or Facebook. These companies can be expected to apply a model something like the one that already works for them: they provide the service “free,” and the price is that they own the data and can exploit that ownership in any way they can think of. Community ownership is probably the only realistic alternative to this arrangement.

The Search for Early Adopters

The early “killer apps” for LoRaWAN technology are installations where a large number of identically configured devices are deployed over in a given area and monitored in real time. The savings in wiring alone are enough to give such projects a compelling reason to consider low-power wireless connections, particularly when no further registration is required to use a community-owned resource such as the one that now exists for the city of Ithaca.

One local group exploring the use of this new capability is a group of researchers headed by Professor Max Zhang of the Sibley School of Mechanical and Aerospace Engineering at Cornell. Their project revolves around data gathered from sensors that monitor pollutants in wood smoke.

On a recent Saturday at Cooperative Extension, Zhang’s team participated in a workshop with Moore and several TTNI volunteers to configure a particular kind of pollution sensor for TTN operation. By the end of the day, the test unit was successfully broadcasting its data for display on an internet-connected PC using open-source dashboard software.

Zhang was encouraged by the outcome. “Working with Terry on the Things Network will save us a lot of effort on the networking side, so we can focus more on the application side,” he said. “The only remaining technical question is regarding how frequently our sensors can broadcast data without overloading the network. We will try and see.”

While representing a remarkable collaboration between university, county extension, and local industry, the workshop also pointed up the rawness of LoRaWAN. The assembled electronics experts did eventually succeed in building a system that moved data from the sensor to a graphic dashboard via the internet “cloud,” but it took them over six hours of concentrated group effort to do it.

Much of the labor in this first workshop would not have been necessary if there had been the kind of guides, automated scripts, and diagnostic programs we take for granted in setting up new devices, so the pain of initially configuring a new kind of sensor can be expected to decrease radically as these support materials are developed. And once solved, every problem like this stays solved for that particular kind of device. But there’s no denying that Ithaca’s TTN deployment is still at the experimental stage.

CAPTION: Terry Moore (left), CEO of MCCI, and Professor Max Zhang of Cornell. Moore holds a typical LoRaWAN device; the red object on the test unit at right is a pollution sensor

“In fact, this is a pretty remarkable achievement,” Moore said. “Previous technology would have taken weeks and would have relied on commercial software. Still, the goal is to be able to train the subject-matter experts in just one or two hours, to allow them to move from vision to proof of concept without intensive support.”

Over the coming months, Cooperative Extension and TTNI plan to hold a further series of workshops to configure wireless LoRaWAN sensors for other likely classes of users. A local company needing to monitor a set of greenhouses and a local initiative to monitor energy usage in commercial structures have both expressed interest in participating; vineyard owners may also be among the earliest local users of the technology.

Moore and Schlather both see the newness of LoRaWAN technology as a major development opportunity—nothing less than the chance to establish a new local industry.

Moore, whose company has been supplying connectivity software and testing equipment to industry partners such as Microsoft for over two decades, sees potential for both MCCI in particular and local entrepreneurs in general. “We see IoT [the internet of things] as a very large opportunity, but we don’t see it in the way promoted by the press and the venture-capital community,” Moore said. “They think that IoT will result in a few new Google-scale companies. In fact, there will be thousands of different uses and thousands of different kinds of subject matter, and it will very difficult for a big company to address this kind of market. We think that enabling the subject-matter experts is the problem, and that’s what MCCI knows how to do. But there will be lots of room here for others to develop commercial solutions, too—the market will be fragmented, so there will be a need for many different approaches.”

In addition to the obvious role that TTN can play in Cooperative Extension’s traditional programs of farming and energy management, Schlather sees its potential for aiding economic and youth development programs as well. “This is a perfect way to involve kids in technology at a very hands-on, practical level,” he said. “We can easily envision 4-H projects centered around the design and construction of specialized LoRaWAN devices for farms and other local industries. Hosting workshops for interested users and providing initial connectivity for Ithaca is a great example of what we’re here for. It will be exciting to see what happens next. We’ve already seen local people step forward with creative ideas for how to use this technology, but I would bet that we haven’t even scratched the surface of the really innovative and exciting applications that people in Tompkins County will come up with to address their own priorities.”

Diversity and Inclusion Are the Basis for Good Design

For Solution Providers, Blockchain Is The Next Wave Of Opportunity For IoT