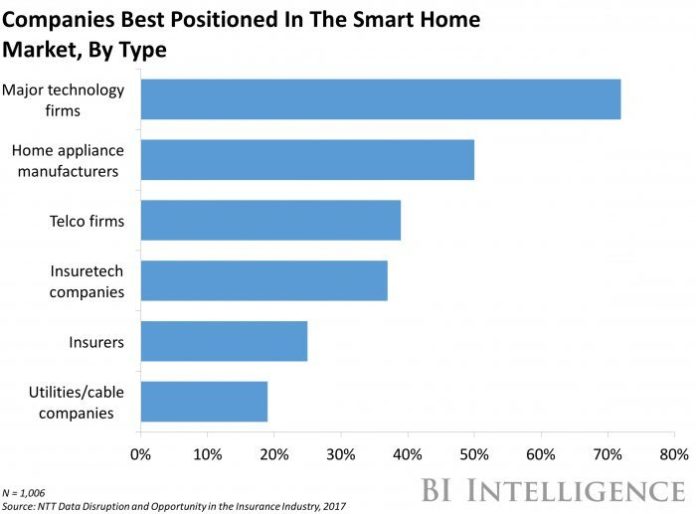 The Internet of Everything — $12.6 trillion ROI expected over the next decade [SLIDE DECK]

Over the past year, the world’s largest tech companies’ smart home ecosystems have taken shape, and the market strategies for the three largest of these companies is now clear.

However, as Reuters notes, this will set the companies on a collision course with each other as the smart home matures and becomes a more mainstream consumer service.

But Apple may fall behind Google and Amazon due to its heavy reliance on iPhone sales to monetize the smart home. As previously noted, Apple is only one of the three companies listed above to rely on hardware to drive revenue in the smart home space. Amazon and Google will continue to be able to monetize the smart home even if the sales of their hardware decline, which is especially relevant given the recent trend of iPhone sales stagnation. But with a new tenth-anniversary iPhone on the horizon this year, the company might be able to overcome this at least temporarily. Further, despite that the company might not be able to get more people to buy iPhones and set up HomeKit, it still has a massive iPhone user base that works to its advantage.

The U.S. smart home market has yet to truly take off. At its current state, we believe the smart home market is stuck in the ‘chasm’ of the technology adoption curve, in which it is struggling to surpass the early-adopter phase and move to the mass-market phase of adoption.

There are many barriers preventing mass-market smart home adoption: high device prices, limited consumer demand and long device replacement cycles. However, the largest barrier is the technological fragmentation of the smart home ecosystem, in which consumers need multiple networking devices, apps and more to build and run their smart home.

Here are some key takeaways from the report:

In full, the report:

To get your copy of this invaluable guide, choose one of these options:

The choice is yours. But however you decide to acquire this report, you’ve given yourself a powerful advantage in your understanding of the smart home market.

Parks Associates: 11% of U.S. broadband households have a smart thermostat