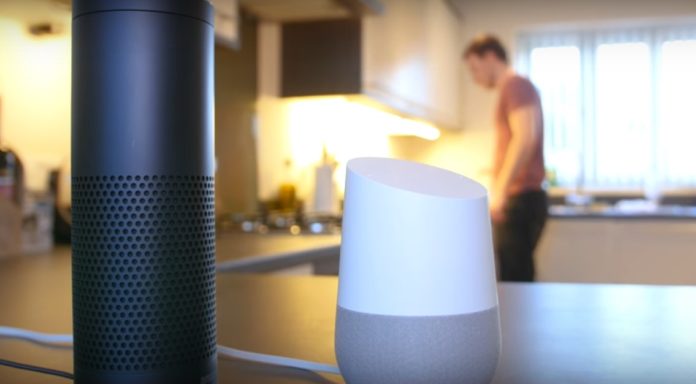 The tech giants Amazon and Google are reportedly working on adding voice-calling features to their Echo and Google Home smart speakers. The two companies are considering turning their gadgets into phone replacements.

Google Home And Amazon Echo To Turn Into Phones

According to The Wall Street Journal, Amazon and Alphabet’s Google are working to develop a new use for their popular home speakers. Google Home and Amazon Echo may become home phones, allowing to be used to make or receive calls. Since smart home products have become a staple in the lives of many people, this new ability to make phone calls directly from the device may be seen as a really valuable addition. However, digital privacy advocates argue that this new functionality would give smart gadgets further control over consumers’ digital lives at home.

Google and Amazon appear to be working to overcome telecom regulations, concerns about privacy and emergency services. But another issue to overcome is the “inherent awkwardness” of having a phone conversation via a speaker. It is still uncertain if consumers would want to speak on a device able to record conversations. It is known that both the Google Home and Amazon Echo continuously record audio in order to enable AI responses.

According to MacRumors, rather than conversations themselves, Amazon would only collect metadata from phone calls. It is still uncertain what Google would retain. Probably a Home-based call service would resemble Google Voice that does not record phone calls.

Amazon is reportedly still taking into consideration multiple options for how the phone feature would work. It is possible that the Echo would get its own phone number. Calls to that number cold be forwarded to be answered remotely on a mobile phone. Another option is to sync the Echo with a user’s contacts and existing phone number.

Rumors On Similar Project From Apple

Google and Amazon could allow external providers such as Vonage or Skype onto their platforms or they could develop the calling tool themselves. Since Apple was also rumored to be working on a connected smart home device that aims to compete with Google’s Home and Amazon’s Echo, the news is of interest to Apple followers. When Apple releases its rumored home hub, it will likely be on par with already existing products on the market. In case that the Google Home and Amazon Echo are set to gain calling capabilities, it can be expected that an Apple product will come with the same features.

Rumors also suggest that Apple’s smart home device will be powered by company’s voice-based personal assistant, Siri. The AI digital assistant already built into Macs and iPhones would reportedly offer advanced microphone and speaker technology and be used to control HomeKit-enabled accessories. On top of serving as a hub for smart products, the device would also be able to answer queries, respond to typical Siri questions, play music and more.

Apple’s smart home device is rumored to be in the prototype testing phase of development. An official finalized plan for release has not been divulged yet. In case that the testing phase is not giving the expected results, it is possible as well that Apple could decide not to move forward with the.

© 2016 ITECHPOST, All rights reserved. Do not reproduce without permission..

2017 Buick Envision Review: It’s More Capable Than How It Appears

The 2017 Buick Envision is actually more capable than how most people would give it credit for.

The FDA have issued a health warning to those who use nasal irrigation pots, or Neti pots, to make sure that they use distilled water, or even boil the water first, to avoid infections. The warning came after some reports of brain-eating amoeba surfaced not long ago during the flu season.

For Honor Guide: Everything About Reputation System

Ubisoft Montreal made “For Honor” a challenging yet intriguing game. How can the players cope up with the complicated mechanics?

‘Dancing With The Stars’ Season 24 Premiere Announced; Some Of The Cast Revealed

“Dancing with the Stars” will return on March 20, and fans are already excited to know which celebrities will join the new installment. There are rumors though that the celebrity lineup might have already been revealed through the cast rumors that have previously been surfacing.