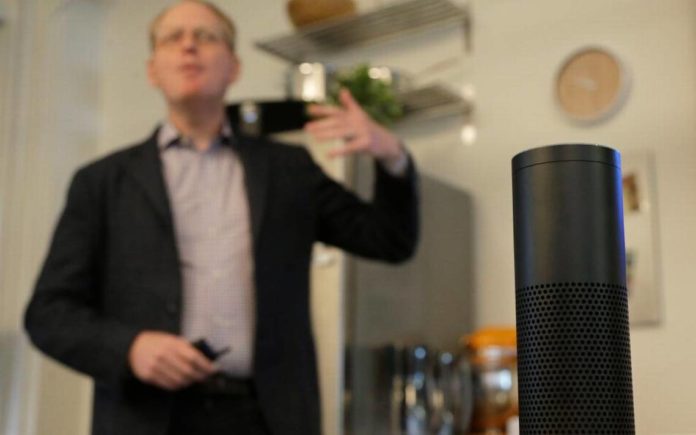 The always-on nature of connected devices in homes now means that police involved in murder investigations are turning to them with a question: Who dunnit?

That’s what’s happening in the case of an Amazon Echo in Bentonville, Arkansas, that sat on James Bates’ kitchen counter in late 2015 when a neighbor turned up dead in a hot tub on the back patio.

Police want to know what the seven microphones in Bates’ Echo heard that night.

Amazon is trying to quash a search warrant on First Amendment and privacy grounds in the latest legal conflict at the intersection of law enforcement, consumers and high-tech companies – an area where the lives of Americans may be racing ahead of existing court rulings.

The larger questions include whether consumers really know when the smart devices in their home are snooping on them, when police can seize that information, and the role of manufacturers in either protecting the data collected or profiting from it.

Amazon, the Bellevue, Washington, e-commerce and cloud computing giant, doesn’t disclose how many Echos it has sold but third-party estimates say that it has sold more than 8 million of the 9.3-inch-tall devices.

The Echo “awakens” when an owner in its vicinity says “Alexa,” the name of its virtual assistant, or another pre-programmed word, and issues a request, say, to play music or audio books, order pizza, ask for an Uber or request other information, such as weather reports.

The recorded conversation goes to Amazon’s servers, which are located throughout the world. A transcript is also made and stored on the servers.

Users of the Echo can also ask for information that might be considered sensitive and private, such as about a health condition or a controversial political figure.

When Echo is capturing and transmitting audio to Amazon servers, a small blue light on the device goes on. Users can disable Echo’s mics by pressing mute, causing a red light to go on.

According to the affidavit of a Bentonville police detective, Bates told officers that he, Victor Collins and two other friends had spent the previous evening watching an Arkansas Razorbacks football game on television, drinking beer and chugging shots of vodka.

Bates told police he went to bed around 1 a.m. and awoke the next morning to find Collins dead in the hot tub. A detective found signs of a scuffle around the hot tub.

Bentonville police sought recordings and transcripts from Amazon for the 48-hour period around Collins’ murder. They also asked a court for warrants to search the Huawei Nexus phone used by Bates and the LG cell phone belonging to the murder victim.

Bates is free on $350,000 bail and has pleaded not guilty to second-degree murder.

Amazon objects to overbroad or otherwise inappropriate demands as a matter of course. Amazon company statement

“Amazon will not release customer information without a valid and binding legal demand properly served on us,” the company said in a statement sent to McClatchy. “Amazon objects to overbroad or otherwise inappropriate demands as a matter of course.”

Amazon Echo is only one of a proliferating number of in-home devices that are smart – using artificial intelligence or other techniques to respond to oral requests by human beings. Those devices include thermostats, televisions, home security systems, and baby monitors,

Legal scholars voice concern about limited consumer awareness of the capabilities and reach of such devices.

“Your imagination is the limit in terms of how this stuff might come up in an investigation that happens in a house,” said Blake E. Reid, a law professor at the University of Colorado. “But I think this is the first time that we’ve seen it come to a head in a high-profile way.”

Reid said that “the implications are not necessarily obvious” to people who buy devices for home use that are always connected to what is commonly called the “internet of things.”

We’re going to litigate these things after the fact when something bad happens. Blake Reid, law professor at University of Colorado

“We’re going to litigate these things after the fact when something bad happens, and it’s only then that we’re going to find out all the details of how it all actually works and what actually gets collected, and that’s worrisome,” Reid said.

Like the homes of many Americans, Bates’ house had numerous connected devices, including a remotely controlled Nest thermostat, a wireless weather monitoring system and a Honeywell alarm system with sensors around the house, according to a police affidavit.

Manufacturers of such devices are increasingly in the sights of the federal government especially when they sometimes collect data on consumers without their knowledge.

Earlier this month, the Federal Trade Commission reached a $2.2 million settlement with Vizio Inc., a privately-owned Irvine, California, manufacturer of smart flat-screen televisions over charges that it had “installed software on its TVs to collect viewing data on 11 million consumer TVs without the consumers’ knowledge or consent.”

The FTC said Vizio was snooping on consumers without their knowledge, tracking what they watched, then turning that data into cash.

“They were bundling information and selling it to advertisers … all done without people’s understanding or consent,” said Michelle De Mooy, head of the privacy and data project at the Center for Democracy & Technology, a civil liberties group in Washington.

Smart devices in the home or smart cars on the road can sweep up all kinds of data considered valuable to advertisers, insurers and even political parties.

“It’s not just rote collection, right?” De Mooy said. “Data analytics are applied to this stuff, and those make inferences about you. They use those inferences to make either content delivery decisions or other decisions.”