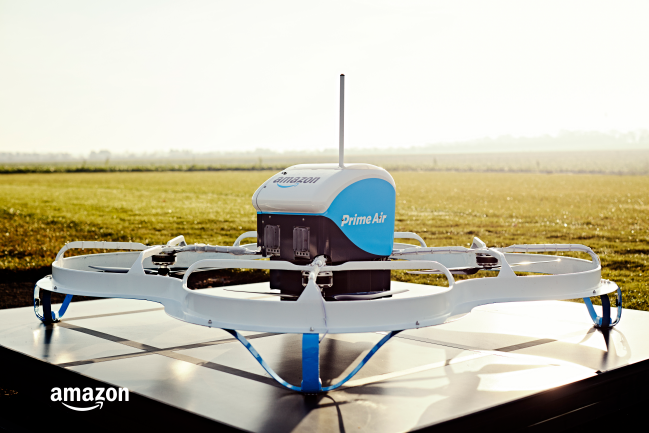 (Amazon CEO Jeff BezosAP)
There’s a great part at the beginning of the movie “Raiders of the Lost Ark,” where, in a moment of triumph, the villainous Belloq gloats to Indiana Jones that “again we see there is nothing you can possess which I cannot take away.”

If I were Amazon CEO Jeff Bezos, I would get this quote inscribed on a wall plaque in my office.

That’s not to imply in any way that Bezos is a villain. But to his competitors, the Amazon CEO and founder is proving frustratingly adept at eating into their businesses.

Just this week, for instance:

And that’s beyond the broader moves Amazon has made in the last year or so, including, but not limited to, competing with FedEx and UPS by moving into logistics and delivery and putting pressure on Google and Facebook by digging in on online advertising.

(This Amazon Prime Air drone is being tested for quick deliveries.Amazon)

In short, in often seems that Amazon is fighting everybody, all the time.

Scarier still for competitors, Amazon’s business model gives it a tremendous edge: With Amazon Prime, especially, Amazon makes it easier to buy physical and digital goods, to the point where you’d never even think to look elsewhere. From there, the company can sell at razor-thin margins, because once you’re hooked, you’ll buy at volume.

And in the same way that Facebook has shown that it’s willing to just straight-up copy competitors like Snapchat if it serves its ends, Amazon has made it clear that nothing is off limits. While a crazy experiment with Wells Fargo to offer student loans through Amazon ended after only six weeks, it shows that the retail giant is willing to sell anything.

Indeed, Amazon is willing to try stuff and fail. Just weeks after the Amazon Fire Phone was declared a flop, Amazon debuted the Echo, a surprise hit that left Google, Apple, and Microsoft scrambling to catch up. Meanwhile, every Alexa-powered device sold is another happy Amazon customer, across retail and digital music.

So to boil it down, Amazon will sell anything, to anyone, at a cheaper price than anybody else can afford — and isn’t afraid to burn money in search of new markets.

For instance, and as pointed out by a commenter on Hacker News, it’s possible that the tweaks to affiliate revenue are a sign that Amazon got what it wanted from websites that promote its electronics, and is now dialing the revenue back to drive more traffic back to its site directly.

That’s long been the Amazon way, and this week gave us a clear sign that Jeff Bezos’ so-called “everything store” isn’t slowing down in its old age.

A famous quote on competition that’s long been attributed to Bezos is that “your margin is my opportunity.”

Or, in the words of Belloq, from the 1981 Raiders film, “once again, Jones, what was briefly yours is now mine.”

NOW WATCH: These designs in the Amazon rainforest were created 2,000 years ago — and archaeologists are still baffled by them

[Inside Tech] Stepping closer to living in a smart home